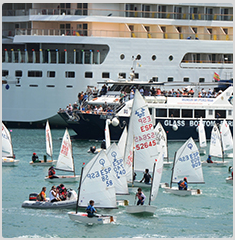 The counselor in the Cabildo, Raúl García Brink has described the fair as a "unique" in the world, dedicated to a blue economy already generates 5.5 million jobs in the European Union

The International Fair of the Sea, Fimar 2016, Las Palmas, host during Thursday and Friday, a first meeting of businessmen from Spain and South Korea that seeks to promote synergies of the blue economy between Gran Canaria and China.

The capital city of Mar Councilman Jose Eduardo Ramirez; the Minister of Development, Energy and R & D + i of the Cabildo, Raul Garcia; and the president of the Canary Islands Maritime Cluster, Vicente Marrero, presented an initiative to travel to the island a Korean expedition of 27 people, representing 13 public and private institutions marine maritime sector Tuesday.

Marrero explained that the objective of this business meeting is to exchange experiences and knowledge with representatives of one of the most important coastal cities of South Korea, Busan, which has 3.6 million inhabitants and lives very facing the sea .

For his part, Raul Garcia has called Fimar as a "unique" exhibition in the world dedicated to a blue economy already generates 5.5 million jobs in the European Union.

It also has advanced to the Cabildo Korean businessmen will advise the tax initiatives has the island, the Canary Islands Special Zone and, above all, its position logistics platform for business with Africa and America.

Ramirez recalled the link that has Las Palmas with South Korea and stressed that these actions of internationalization aimed at creating "more and better" jobs, with the complicity of companies, governments and universities.

In that vein, Vicente Marrero recalled a study of the maritime cluster Canary Underlining that marine maritime activity in the archipelago could generate 20,000 new jobs until 2020 and, to that end, they proposed 117 activities that could double the impact of the sector in the canary GDP of 6 to 12%.

As an example, Marrero pointed out that every two berths in marinas generate 1.5 jobs and that the study indicated that Canarias has a deficit of more than 3,000 berths today.

The Forum Ocean Spain-Korea be held on Friday, at 16.00 and the Hotel AC Gran Canaria involving, among others, the Korean university Maritime and Oceanic, Maritime Institute of the Asian country, the BPA, Korea Telecom, Department of Ocean City, Puerto Foundation of Las Palmas, Canary Islands Oceanic Platform and the Technological Institute of the Canary Islands.

This forum will, in addition to issues related to the blue economy, ports, smart cities, convergence of technology and desalination plants silvers try.